Radon comes from the natural breakdown of uranium in soil, rock, and water. The release of this radioactive gas enters the air you breathe, causing potential health risk to you and your family. Radon gas can be found in just about anywhere. It can get into any type of building - homes, offices, and schools - and build up to high levels.

What you should know about Radon

Radon is a cancer causing radioactive gas. You cannot see radon and you cannot smell it or taste it, but it may be a problem in your home. This is because when you breathe air containing radon, you increase your risk of getting lung cancer. In fact, the Surgeon General has warned that Radon is the second leading cause.

What is the "acceptable" level of radon?

The US EPA has established the "action level" for deciding when you need to do something about the radon in your home, school, or work place is 4 pCi/L. pCi/L=picocuries per liter, the most popular method of reporting radon levels. 4pCi/L is the level accepted by most states.

We've found a great house, but it failed the radon test.

If you've found the perfect house based on all other factors (price, location, size, etc) and it happens to have a radon level above 4.0 pCi/L - plan on buying it. Radon levels can be reduced! That's what radon mitigation systems do. There has never been a home where the levels could not be brought within EPA acceptable guidelines. If the home already has a system in it, great! That means the problem has already been addressed, and all you need to do is re-test to make sure that the system is working properly. As one homeowner said recently, "We found a great house and it had a radon system in it. That scared us, thinking that home had a radon problem. I wish now we'd bought that one, instead of having to pay ourselves to put a system in the house we did end up buying and living for 7 years in a house with radon."

How does Radon enter the home?

Typically the air pressure inside your home is lower than the pressure in the soil around your home's foundation. Due to this difference, your house acts like a vacuum, drawing radon gas in through foundation cracks and other openings of your home. Radon may also be present in well water and can be released into the air in your home when water is used throughout the house. 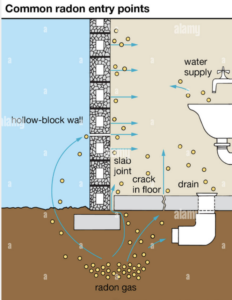 If the home fails the test, who pays to fix it?

Paying to fix defects in a home is part of the final negotiation procedure between the buyer and seller. Most of the time the seller agrees to pay for it. Sometimes if the house is sold in an "as-in" condition, the buyer has to pay for it. Sometime it's split between the buyer and seller. There is one very important comment that must be made. Elevated radon levels are considered a serious defect in a home. The levels can be reduced - and shouldn't scare you off from buying the home - but can be an important negotiating tool for you. Failure to address serious defects can be cause to withdraw from a real estate transaction. Also, if the home fails a radon test for a potential buyer, and that buyer withdraws from the transaction, the seller MUST change the disclosure statement to reflect that the home did fail a radon test. Failure to do so is considered real estate fraud!

How much will it cost to fix my radon problem?

The price will range somewhere between $800.00 - $2500.00 for a standard sub-slab depressurization system. Complicating factors that will increase the price include: crawl spaces with exposed dirt, multiple slabs, rock basement walls, sand beneath the slab, no aggregate beneath the slab, and pipe penetrations through fire rated walls, and architectural considerations.

I'm thinking of buying a home with a radon mitigation system in place. What should I look for in order to make certain the system is working properly?

You may want to call in a licensed radon mitigation contractor and ask that he inspect the system. You can get a list of approved contractors from your state radon officer.

What are the advantages or disadvantages to having a radon mitigation system?

The primary advantage is that you will have lower in-home radon levels if the system was installed correctly and it is operating properly. A second advantage, at least in many parts of the world, is that you will see a much lower level of humidity (dampness) inside the building, especially in houses with basements or slab-on-grade floors. The type of mitigation system will be a factor in this situation. In other words, if the system is an active "sub-slab-suction" design or has incorporated a vapor barrier over the bare soil, then this may be one of the additional benefits. In many cases, we have heard of folks getting rid of their dehumidifier after seeing how dry the basement was after switching on their mitigation system. One of the disadvantages is that you will pay a small energy fee with an active design because of the energy required to run the fan.  (most will only draw about 50 watts).  There is also a small amount of of reverse flow of inside (conditioned) air that you may have paid to heat or cool.  Another possible problem, in a poor installation, is that you may be able to hear the fan running . Fortunately, the complaint is seldom heard and if it is, it can be easily fixed.

Are there other symptoms or health problems, other than lung cancer that are associated with radon exposure?

There are no short-term radon exposure symptoms that have ever been documented. At least with the levels you are likely to see in a home, school, or business. Also, you will not have any other bodily symptoms such as joint pain, stomach or intestinal problems, headaches, or rashes from the short-term radon exposure at natural environmental levels. it will take years of exposure at relatively high levels before you are likely to have any symptoms. The only (documented) known symptoms are the same as those listed for smoking induced lung cancer symptoms.

Unfortunately, sealing the slab cracks and openings does not generally have any significant effect in home indoor radon concentrations. This seems strange we know is mixed in soil gas and it is pulled into the house through cracks by slight pressure differences caused by wind, temperature differences, and fan action. The problem is that sealing generally results in higher concentrations of radon in the soil gas, so even though the sealing reduces the amount of gas that gets in the house, the same amount of radon gets in. So radon levels stay the same! Occasionally, sealing is partially effective, so you may want to try it. Be sure to use sealants that can stick to dirty concrete (like polyurethane caulks). Even if you're not successful, any slab sealing will increase the effectiveness of a fan powered radon mitigation system.

How long will it take to fix my radon problem?

A typical job takes about one man day, and the retest requires two or more days for the radon test. You can generally get your house fixed and retested in about 2 - 4 days.